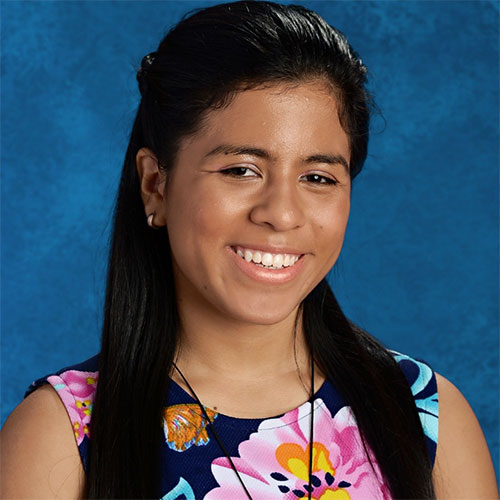 Gabriela grew up in Venezuela with a love of books inspired by her mother. Outside of her studies she worked on social projects in Caracas, attended a social empowerment course in Mexico and participated in the 2017 Yale Global Scholars program. While she was at Yale, the Venezuelan political and economic situation worsened, and Gabriela’s family insisted that she remain in the United States. She applied for political asylum, finished high school with Pathways, Inc., and found a job teaching once she received her work permit. After completing an internship at Yale, Gabriela continued her studies in history at North Shore Community College. She has continued her interest in social projects at NSCC where she is student president and has worked with MASSPIRG on a campaign for affordable textbooks. She is involved with the Art Club, the Environment Club and is President of Leadership in Phi Theta Kappa (an honors society recognizing academic achievement for community colleges). In the summer of 2020, Gabriela volunteered at Upchieve, doing academic coaching for high school students. While continuing her studies, achieving academic honors and engaging in meaningful extracurricular activities, Gabriela has also been facing a difficult family situation. Her father died a number of years ago, and she has been caring for her mother who is in an advanced stage of Alzheimer’s disease. Their insurance coverage is meager, and she has used money saved for her education to pay for her mother’s treatment. Despite all of this, Gabriela has continued to work toward her goal of becoming a teacher in History and Languages. She expects to graduate from NSCC in spring of 2022 and will go on to get her bachelor’s degree. She would also like to pursue a Masters in Education, in her own words, “so that my students can count on someone to support them and guide them on the path they decide to travel.”