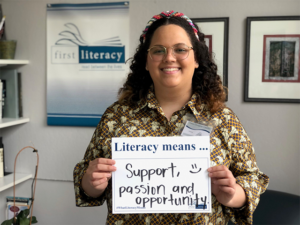 Diana grew up in the Dominican Republic, and from the very start, had great expectations for herself and her education. Because of her mother’s wishes, she felt pressured to pursue a path in professional engineering, though her passion was in healthcare. Growing up in a third-world country her opportunities were limited, but she knew she wanted more. At the age of 18, Diana made the decision to come to the United States in search of a better life. As the first in her family to come to a foreign country to pursue her dreams, she knew it would not be easy, but she was determined to take the leap.

Adjusting to life in a new country was difficult. Most of her family and friends were back in her home country, and she was navigating a new life on her own. Soon she found the Catholic Charities’ English Language program and was nominated for a First Literacy scholarship.

“When I first met with Bryan and Terry for my scholarship interview, they listened to my story, and they both told me I would be a great nurse, which had stuck with me all along. My mom would never and hasn’t accepted yet that that is what I want to do, and they were the first people to tell me I would do just great.”

Now Diana is studying at Bunker Hill Community College and is following her dream of becoming a nurse practitioner. She currently holds a 4.0 GPA and is taking the prerequisite courses for the registered nursing program.

“I value education very deeply and going to college has always been in my plans. First Literacy gave me the green light to keep going forward in the trajectory of my life.”

Diana is one of many phenomenal scholars determined to reach their goals regardless of whatever obstacles may be in their way. First Literacy is proud to support Diana and many others in their journey to achieve their dreams.

BACK TO ANNUAL REPORT