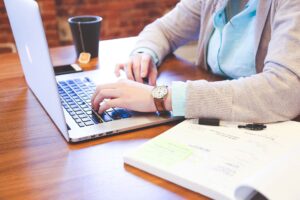 Instructor Bonnie Rivers, led the project design, envisioning the class as a simulated IT company. Students learned how to clean, secure, and maintain computers—as well as to troubleshoot common problems—all using free software.

Students received weekly job assignments based on real tech content and practiced IT customer service skills in role plays. Students participated in a “lab class” on Fridays, where they updated and repaired their own laptops, using the free software they learned about in class. As students progressed they moved on to maintaining other computer labs at Mujeres—a benefit for the organization and great hands-on practice for the students.

A Window Into The World Of IT

A “techie scavenger hunt” field trip to Micro Center took students out of the classroom and into the real IT world. Students investigated computer hardware and software, using their phones to take pictures and to calculate costs, all of which was brought back to the classroom for discussion.

One of the most impressive outcomes of the project involved the restoration of some old computers that had been donated to Mujeres but were sitting unused because of various problems. Students used their newly acquired skills and free software to solve multiple issues, such as removing unknown passwords and previously installed domains. Once the computers were restored with new operating systems and loaded with appropriate software, they were donated to students without computers. As word spread about the project’s success, local corporations began to donate additional computers to Mujeres for restoration and re-use.

Tech Is For Women Too

The project also helped students see how important women are in the IT computer field. Many of the female students really enjoyed working on computers and as a direct result of the project are now considering employment in the IT industry.

Through the First Literacy Grant, Mujeres Unidas Avenzando was able to create a practical and fun classroom experience for women in their program. As a result of the project’s success additional funding was secured from another source to continue the program.

First Literacy Grants are perfect for piloting programs just like this. Our grants provide non-profit Adult Basic Education organizations the chance to try something new or to strengthen their programs in fundamental ways. To learn more about First Literacy Grants, contact us.

What Difference Does It Make?